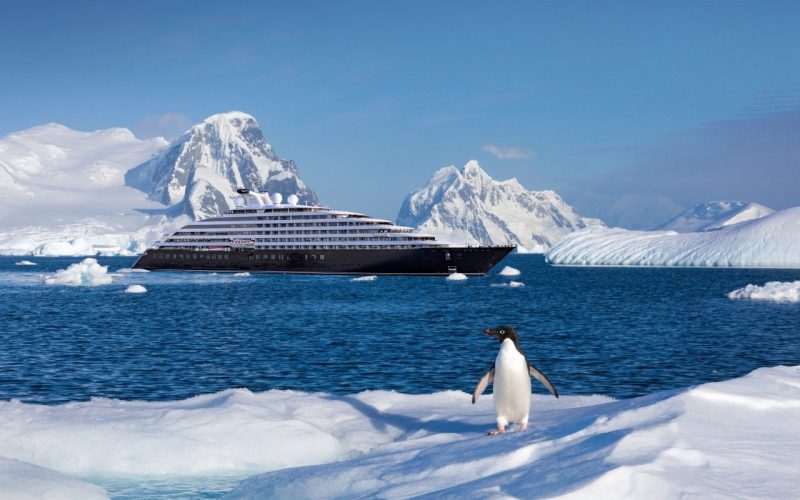 The number of tourists to Antarctica for the 2020 season is expected to be the second largest in history with more than 47,000 visitors, according to the International Association of Antarctic Tour Operators (IAATO).

Compare that to Alaska which sees about 1 million cruise guests per year. IAATO reports the anticipated increase this season is due to two new vessels being added to its fleet.

The mix of nationalities on-board has remained almost unchanged. Some 34% were American and 11% were Australian. The other large numbers of tourists were British (9%), Chinese (8%) and German (8%). Canada made up another 5% while France and Switzerland accounted for 3% each. Only 2% of passengers were from Japan.

There are 124 tour operators which have signed up to abide by IAATO’s strict environmental protection standards.

These rules require cruise ship operators to coordinate with each other so that only one vessel at a time is at a landing site. Any vessel carrying more than 500 passengers is asked not to make any landings in Antarctica whatsoever.

The vessels which do not land carry 26% of the tourists visiting the region. Although they never set foot onshore, these visitors can take in the amazing atmosphere and spectacular views of the white continent.

Cruises depart from either Ushuaia, Argentina or Punta Arenas, Chile and sail through The Drake Passage with its choppy seas and gale force winds. This roughly 40-hour portion of the journey is referred to as The Drake Shake with most passengers having to resort to seasick patches to make it through.

They then pass near Elephant, South Shetland and Deception Islands to the Antarctic Peninsula. Conditions at Elephant Island are so rough that landings are almost never possible. At the South Shetland Islands, visitors can climb to the volcanic peak for some amazing views and possibly spot whales in the sea below. They can also dig hot pools in the thermal beach sands. Deception Island is a collapsed volcanic dome with a flooded interior crater which provides sea-access for vessels to travel into its interior.

Tour operators report that Antarctica is in such a state of change that no visit is ever the same. The weather is so unpredictable and can change so suddenly that there really are no set itineraries. But visitors can be confident they’ll be able to take in epic views of icebergs and see exotic wildlife including penguins, seals, whales and various birdlife.

Expeditions to this remote and untouched part of our planet do not come cheap. A private excursion on a motor yacht can cost USD$400,000 for 12 people. But most people opt for the larger cruise lines. The least expensive is just over USD$5,000 for a week-long trip. About USD$13,000 will buy a two-week trip depending on activities. But for those who do make the journey to this enchanting world, many say it’s like going to another planet and is one of the greatest experiences of their life.