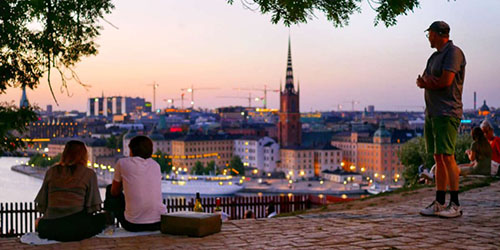 Sweden is the only EU country that has not taken emergency measures and is not amenable to general panic. Belarus and Russia did the same.

Successful Sweden proved by its example that it is not necessary to impose a nationwide quarantine and destroy its economy due to the fight against coronavirus. The Swedes are sure that the panic with the coronavirus is very bloated and indicate statistics according to which in Sweden among the infected, the mortality rate is only 2%.

The diagnosis of coronavirus was diagnosed in 2,000 Swedes, 20 died. In terms of 100 thousand of the population, this is more than twice as much as, for example, in neighboring Norway, where there is a quarantine, and a little more than in Finland.

Sweden only introduced some restrictions. As in other EU countries, entry of non-EU citizens is prohibited, large events with more than 500 people (concerts, football) are canceled, high school students are recommended to switch to home schooling, and universities switched to online mode. The rest of the Swedes continue to live as before – enterprises, offices, kindergartens and schools operate normally.

According to the chief epidemiologist of Sweden, Anders Tegnell, coronavirus is not dangerous for children. He relies on studies conducted in China, according to which the disease is rarely transmitted to children and proceeds quite easily, and they infect adults little.

The Swedish authorities decided that quarantine is a voluntary and personal responsibility of everyone, and they are not going to stop the country to fight the virus, which, as many experts are convinced, the majority of earthlings should be ill for immunity. Swedish doctors are convinced that coronavirus can be stopped by immunity or a combination of immunity and vaccination.

Swedish Prime Minister Stefan Löfven, in a direct televised address, politely encouraged his compatriots to stay home if they were unwell. Older people are asked to isolate themselves, as they are at risk. It is not recommended that they also communicate with relatives. No more restrictions that are advisory in nature.

Some enterprises independently decided to transfer their employees to a remote mode of operation, if possible. Cafes and restaurants in Sweden are open and even plan to start earlier service on the terraces, thanks to the good weather.

Closed some museums, cinemas, gyms. On buses, drivers were fenced off from passengers. People walk freely, there are no restrictions on leaving the house and no movement. The Swedish authorities allowed to be ill without a medical certificate and not go to work for two weeks, not a week, as before.

According to the head of the Swedish Department of Health, Carlson, the closure of schools and kindergartens is possible from the point of view of the law, but Swedish experts say that this will not particularly help in the fight against the epidemic. “The impact of school closures at this time will be negligible. This is not relevant at present, ”he said.

The position of the Swedish leadership is based on the assertion that if the normal functioning of society is violated by coercive measures, then this will do more harm than good. About 90 thousand people die every year from various diseases and external causes in Sweden, which is incomparably more than the number of deaths from coronavirus.

There is no cure for coronavirus in Sweden, and only those in need of help or intensive care are taken to the hospital. Tests for coronavirus are not performed here, explaining that treatment is the same for any strain of influenza and complications must be eliminated. If a person has symptoms of a cold, he needs to call the help desk and they will decide what to do next. Those who have a mild illness do not test. The Swedes believe that it makes no sense to take all patients and do tests, if in most cases nothing needs to be done with this virus, it goes like a common cold, maybe a little harder.

The Swedish state took upon itself the payment of hospital benefits: approximately half the salary. But the Swedes wisely decided that working is more profitable than hurt – prices and taxes in Sweden are among the highest in Europe, so few can afford such luxury as even a two-week quarantine.