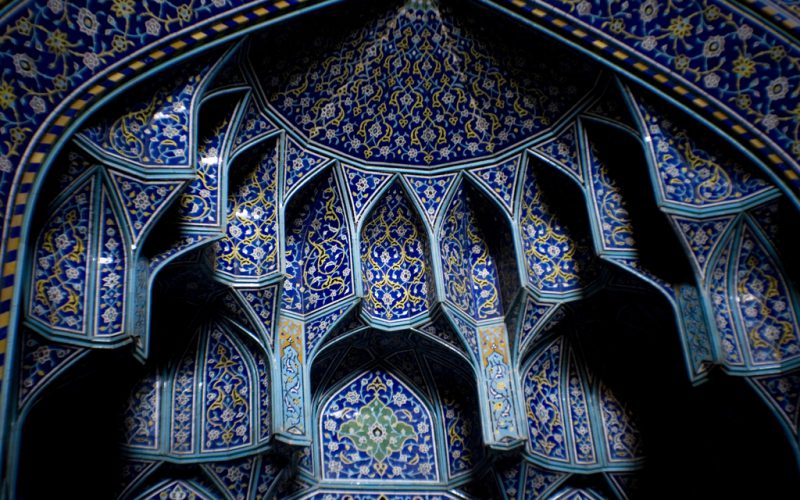 Iranian architecture can be studied in two eras, pre-Islamic era (divided into two styles of Parsian and Parthian) and post-Islamic era

The architecture of pre-Islamic Iran is divided into two styles of “Parsian” and “Parthian”.

it is the first architectural style in Iran starting from Achaemenid era until the invasion of Alexander (from 6th to 4th B.C). Rectangular spaces with columned halls, construction of buildings on platform, introverted style, using wooden ceilings, carved stones, plinth and capital, decoration of entrance and glazed tile in interior sectors are among the main features of Parsian architecture.

As the name suggests, Parthian Style is the architecture used by the Parthian, it includes diversity in patterns, introverted style, symmetry in construction of palaces and temples, increase in the height of buildings, curved arches and domes, squinches below the domes, using local materials like rubble, adobe, brick, mud, and stucco work.

In spite of the advent of Islam, for years, Iran’s architectural style was dependent on the past elements. After that, Muslim artists introduced new forms, buildings, and constructs like mosque, school, bridge, castle and caravanserai with respect to previous artistic features especially Sassanid ones and inspired Islamic mind-set.

At the beginning of Islamic time, more attention was paid to the construction of mosque. The mosques usually had simple structures, but from this time, we witnessed the rise of Muqarnas decorative designs (decorations made of brick, tile, stone, plaster and wood) as an ornament of the mosque. The Muqarnas decorative styles used in Gonbad-e Qabus tower is one of the earliest examples of it in 10th century. Besides, Ribat-i Mahi, contemporary to Gonbad-e Qabus tower, has muddy brick and stucco decorations as well and acts as a precedent for the more lavish decorations of Seljuk and Ilkhanate Eras.

Iran’s Architecture from Seljuk to Timurid (11th to 15th Centuries)

Seljuk dynasty (11th century) is one of the most outstanding periods of Iran’s architecture. The construction of schools was popular in this time and many schools were built in the cities of Baghdad, Neyshabur, Marv, Rey and Hyrcania (current Gorgan). The plans of most of the buildings in this era was Four-Iwan design (Chahar Iwani) with stucco and brick as their prominent decorations. Iwan is a rectangular hall or space, usually vaulted, walled on three sides, with one end entirely open. They are mostly build in exterior space of the buildings having entrance/ exit spaces. Different buildings such as mosque, school, tomb and caravanserai were constructed in this era as well. The splendour and glory of Seljuk architecture are completely visible in Jameh mosque of Isfahan. Although, Jameh mosque of Isfahan is the result of continual construction, reconstruction, additions and renovations of 15 centuries of Islamic Era, the most beautiful and important part of the mosque belongs to Seljuk Dynasty. It is interesting to know that the use of tile as a decorative element has become popular since the end of 10th century. The oldest examples are the tiles of Kharraqan towers in Qazvin which were built in Seljuk Dynasty.

Preserving the Seljuk architectural styles including Four-Iwan design, Ilkhanate architecture entered a new stage; Iwan became higher with narrow width and the walls got narrower as well. Decorations like stucco, tile work and brick with special patterns adorned buildings. Mihrabs of Isfahan Jameh Mosque, Urmia and Oshtorjan mosques are the obvious proofs of the mastery in stucco art in that era.

During Timurid dynasty, the art of mosaic tiling reached its zenith, it is the art of the assembling of small pieces of coloured tiles to make an image. Mosques like Goharshad in Mashhad, Blue in Tabriz, Khargerd Ghiasieh School in Khorasan and some buildings in Herat and Bukhara show the importance and application of this art in religious buildings.

In this era, Grand Khorasan in east of Iran played an important role in development of architecture as well. Khorasan was the origin of lots of innovations in architecture that spread it to other parts of the country. Two-Iwan style was used in Khorasan for the first time and it was one of the first cities that the traces of turquoise tile are found in, this style can be observed in Mosques of Zuzan, Gonabad and Forumad.

Iran’s Architecture from Safavid to the Contemporary Era

The 16th and 17th centuries are known as the period of flourishment of Islamic arts in Iran. In the shadow of the support of Safavid’s kings, art and architecture advanced drastically. The majority of buildings in Safavid era such as mosques, schools, and caravanserais were constructed in a four-Iwan style and Muaraq (Mosaic) and Haft Rang (Seven-Coloured) tiles were the main decorations used in the buildings, the template of tiles were square which were glazed and seven colors were used to design them. Calligraphy on tile became common in decoration of religious buildings as well. Public places like mosque, bridge, bathhouse, water reservoir and specially caravanserai were built more than ever. Amin Abad caravanserai in Isfahan, Deh-bid caravanserai on the road of Isfahan to Shiraz and the numerous Abbasi caravanserais built all over the country were important caravanserais of this period.

After the fall of Safavid Dynasty, the same architectural style of that time continued like before but it was not as glorious as before. Kalat Naderi Palace (Khorshid Palace) in Khorasan province (Afsharid era) and Vakil complex in Shiraz (Zandiyeh era) are outstanding buildings of this period. After this period and with the beginning of Qajar Reign, architecture was the centre of attention again. Some of the buildings from Qajar era like Al-Nabi Mosque in Qazvin, the Haj Ali Agha complex in Kerman, Imam Mosque, Sepahsalar Mosque and school in Tehran, as well as Golestan palace are the examples of the breathtaking architecture of Qajar era.

The contemporary architecture of Iran starts from early 19th century and continues up to now. Architectural structures of buildings in this time were the combination of traditional and western architecture styles which were witnessed in constructs like Shahrbani Palace, Marble Palace and Post Office building of Tehran, or modern architectural style was entirely used.