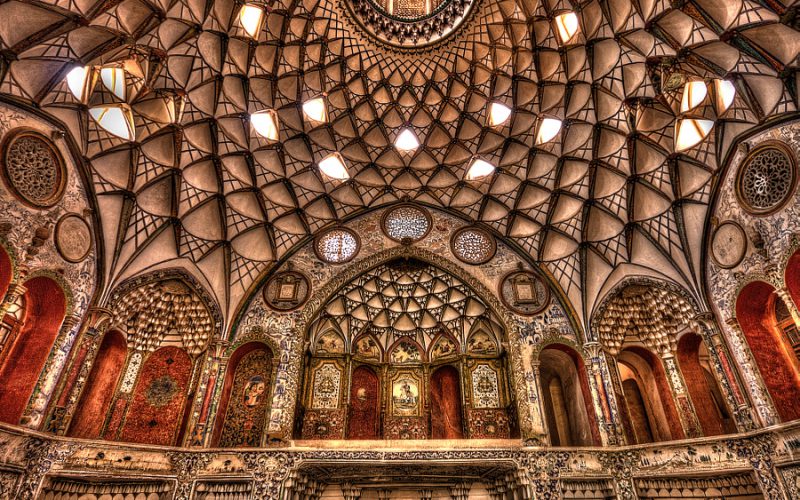 Medieval Iran has witnessed the emergence of some of the most beautiful wonders of Islamic art and architecture. These wonders mostly emerged during the Safavid dynasty, when Isfahan was the capital city of Persia. The Persian architecture from the 1500s to the 1800s, known as the early modern period, featured quite distinct architecture elements like the pointed arches, the sculptural stalactites, known as ‘Muqarnas’, and the bulbous domes with floral decorations. The polychrome tiles of blue, gold, turquoise, and white cover the interiors of mosques and palaces, in the forms of complicated floral and geometric patterns as well as the Arabic calligraphy quoting verses from the Quran.
The marvelous architecture that rose in the time remains up to this day a sight to behold. It transcends you to the heavens with its otherworldly charm. So, let’s take a look at those images by photographers who managed to capture the essence of this quite unique charm.

Golestan Palace means the palace of flowers, and it was the royal residence for the Qajar dynasty which ruled Persia during the 19th century.

Shah Mosque, also known as Imam Mosque, is a relic of Safavid architecture which lies on the southern side of Isfahan’s central square Naghsh-e Jahan.

Sheikh Lotfollah Mosque is another mosque and Safavid Architecture masterpiece marking the eastern side of Naghsh-e Jahan square.

Bazaar of Isfahan is a historical Market, dating back to the Safavid dynasty, and one of the biggest in the Middle-east. It lies on the northern side of the Nagsh-e Jahan square.

Ali Qapu is a grand Safavid palace on the western side of the Naqsh-e Jahan square. Its name literally means the Imperial Gate, as it was originally mean to be a great portal to the square.

Allāhverdi Khan Bridge, also known as the Bridge of 33 Spans, is the longest on the Zayandeh River and one of 11 other bridges in Isfahan. It was constructed, during the Safavid dynasty rule, by Allahverdi Khan.

Chehel Sotoun is a palace built by Shah Abbas II of the Safavid dynasty to receive and entertain guests. Its name means 40 columns, referring to its 20 column by the entrance which seems to double in number when reflected on the water surface of the front pool.

Abbasi House is a grand traditional house with six courtyards. It was built during the Safavid dynasty and it is a fine example of Kashan’s traditional residences.

Bazaar of Kashan is an old market in Kashan which dates back to the Seljuk era. It includes the exquisite Timcheh-ye Amin od-Dowleh which was designed by the famous 19th-century Persian architect Ustad Ali Maryam.

Broujerdi House is an old house built during the Qajar dynasty, also by Ustad Ali Maryam, for the wife of a wealthy merchant.

Sultan Amir Ahmad Bathhouse is a traditional public bathhouse which was built during the Safavid dynasty and renovated during the Qajar dynasty after getting damaged by an earthquake.

Nasir Al-Mulk Mosque was built in the 19th century during the Qajar rule. It is also known as the Pink Mosque, and it is recognizable by its colorful glass. The light passing through the windows colors beautifully on the reflective ground tiles.

Shah Cheragh is a mosque which houses the tombs of the sons of the seventh Imam, one of the 12 Imams of the Shia Muslims who mainly reside in Persia. It is also famous for its dazzlingly glittery interior.

Vakil Mosque was built during the Zand dynasty rule for southern Iran in the second half of the 18th century, and it was later restored by the Qajar.

Jame Mosque of Yazd is an Azeri styled grand congregational mosque of the historical city. Its construction was probably completed during the 14th century.

Alexander’s Prison is a school which dates back to the 15th century. It got this name because of the references in a poem by the Hafez, the famous Persian poet. However, there is no evidence that the school was formerly Alexander’s dungeons.

Fahadan House was built in the 18th century and it has been turned into a Museum Hotel.

Archway from old brick and mud circulates through the historical Yazd city. Lighting comes from the holes in the ceiling.