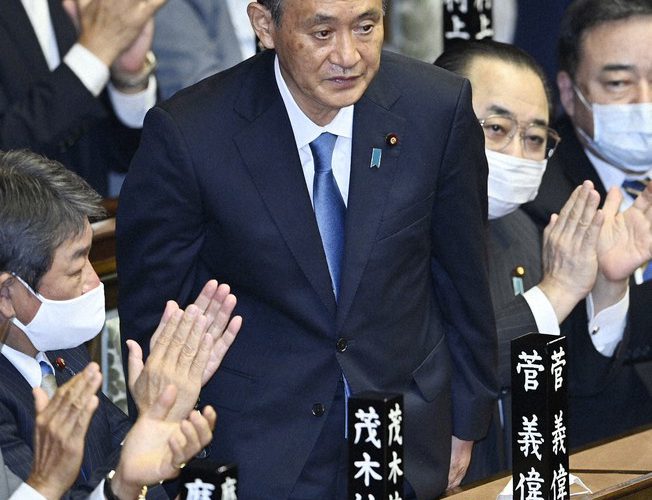 Yoshihide Suga took office as Japan’s first new prime minister in nearly eight years on Wednesday, forming a Cabinet of familiar faces as he pledges to stay the course set by his predecessor Shinzo Abe.

For Suga, known as a skilled backroom operator, the immediate focus will be reviving the battered economy while keeping the novel coronavirus under control. Longer-term challenges include the country’s falling birth rate and simmering tensions with Asian neighbors.

Suga, who became leader of the ruling Liberal Democratic Party earlier this week, has said he is committed to advancing Abe’s policies including “Abenomics,” a mix of measures aimed at beating deflation and spurring growth in the world’s third-largest economy.

The 71-year-old farmer’s son, who unlike Abe and many other lawmakers in Japan is not the scion of a political dynasty, has hinted at the possibility of additional steps to shore up the economy.

This would come on top of a 230 trillion yen ($2.2 trillion) package the government has already set out for tackling the COVID-19 outbreak, including subsidies for beleaguered businesses and promotion of domestic tourism.

He will also take over a sweeping review of Japan’s national security policy that was initiated by Abe after plans to introduce a U.S.-developed missile defense system were scrapped due to technical issues.

Health minister Katsunobu Kato was chosen to succeed Suga as chief Cabinet secretary, a key post that serves as both a policy coordinator and the government’s top spokesman.

Outgoing Defense Minister Taro Kono was tapped for minister in charge of administrative reform, an area Suga has promised to focus on to reduce bureaucratic sectionalism.

Seven were either shifted to other portfolios or returned to ministerial positions they had held in the past, while five were given their first Cabinet posts, including Defense Minister Nobuo Kishi, Abe’s younger brother.

The average age of the Cabinet is 60.4, with Environment Minister Shinjiro Koizumi the only one younger than 50. There are only two women, Olympics and Paralympics minister Seiko Hashimoto and Justice Minister Yoko Kamikawa.

The appointments were spread across the LDP’s seven major factions, including the two led by Suga’s rivals in the party’s presidential election on Monday, former LDP policy chief Fumio Kishida and former Defense Minister Shigeru Ishiba.

Abe’s Cabinet resigned en masse Wednesday morning, drawing an end to the premier’s record-long tenure of seven years and eight months. He announced in late August he would step down to receive treatment for a chronic bowel disease that had left him fatigued and unsure of his ability to lead the country.

“I have spent every day putting my all into economic recovery and diplomacy to protect Japan’s interests,” Abe told reporters at the prime minister’s office. “It is my honor to have been able to work on a range of issues along with the people during this time. I want to thank everyone from the bottom of my heart.”

The Diet convened an extraordinary session in the afternoon to elect his successor, with Suga’s victory a foregone conclusion as the ruling coalition of the LDP and junior partner Komeito has a majority in both chambers. He received 314 votes in the 465-member House of Representatives and 142 votes in the 245-member House of Councillors.

After announcing the members of his Cabinet, Suga was formally inaugurated in a ceremony at the Imperial Palace. His tenure will last through the remainder of Abe’s term as LDP leader until September 2021.

Suga is slated to hold his first press conference as prime minister in the evening, with all eyes on whether he will hint at dissolving the lower house and calling a snap election.

At 71 years and 9 months, Suga is the oldest prime minister to take office since Kiichi Miyazawa in 1991, a fact belied by his notorious work ethic. Suga says he keeps fit by taking 40-minute walks and doing 100 sit-ups every morning.

Aside from tackling the short-term economic damage that the coronavirus has caused by forcing people to stay home and wiping out tourism from overseas virtually overnight, Suga will be tasked with stemming the country’s falling birth rate and improving its dismal fiscal health.

The consumption tax will eventually need to be raised from the current 10 percent to cover swelling social security costs, Suga has said, though not for the next decade or so.

On the foreign policy front, Suga will need to maintain a careful balance between the United States, Japan’s principle security ally, and neighboring economic powerhouse China.

He has promised to continue working toward securing the return of Japanese nationals who were abducted by North Korea in the 1970s and 1980s, and to hold negotiations with Russia to resolve a territorial dispute to clear the way for a long-awaited postwar peace treaty.

Suga also looks to continue efforts to amend the postwar Constitution by adding an explicit reference to the Self-Defense Forces to the war-renouncing Article 9, a goal Abe vigorously pursued but ultimately failed to achieve.