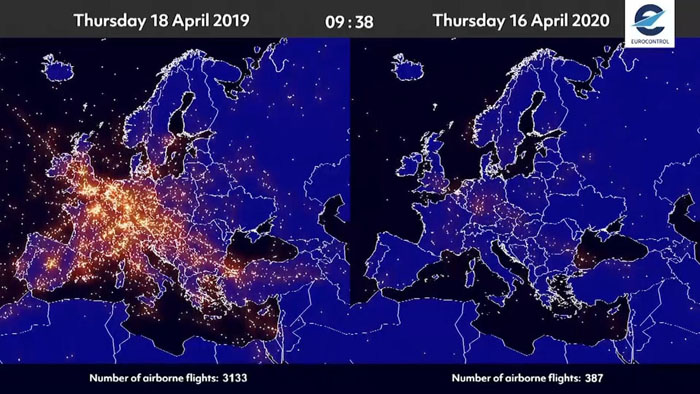 Impact of State restrictions, uncoordinated approach and uncertainty over COVID-19.

EUROCONTROL has revised downwards its Draft Traffic Scenarios up to February 2021. Under its new “Current Status Scenario”, the total number of flights expected in Europe is anticipated to be 55% lower than in 2019, a drop of 6 million fewer flights, or a further 1 million reduction in European flights than previously anticipated.

Eamonn Brennan, Director General EUROCONTROL said, “We’re going backwards now and it’s really worrying for the entire industry. There’s a lack of coordination between States on how to manage air travel despite good guidance from EASA and ECDC; there’s a lot of confusion and very little passenger confidence; and of course outbreaks of COVID-19 are picking up across Europe.

Our new Current Status Scenario could improve if there was more coordination between States on how best to handle air travel through harmonised testing and common epidemiological assessment criteria. That would give more predictability for passengers, airports and airlines. At the same time, it could get even worse if States continue to impose blanket restrictions and quarantine measures – this approach is killing the travel and tourism industry. We welcome the European Commission proposals for harmonisation and encourage all parties to adopt them.”

EUROCONTROL had previously produced Draft Traffic Scenarios on 24 April, based on a “Coordinated Measures Scenario”, which remained highly accurate for April through the end of August and predicted a gradual recovery from -89% in April to -50% in August. This prediction was correct (+/- 1% each month). That scenario had indicated a drop of 45% or 5 million fewer flights. That scenario also assumed that if the trend remained positive, the gradual recovery could potentially continue for the rest of 2020 and assumed a restoration of some inter-continental operations.

However, in response to COVID-19 outbreaks breakouts across Europe since mid-August, States have been imposing individual and uncoordinated national restrictions, quarantine requirements and testing measures, which are primarily in accordance with National epidemiological assessments and National health measures. Often, these measures are announced with very short notice.

This ‘uncoordinated approach’ by States has led to much confusion and eroded passenger confidence. Forward bookings for airlines over the coming months are extremely low. By 13 September, traffic was already down 53% for the month compared to the same period in 2019, which was already 13 percentage points lower than EUROCONTROL’s previous prediction of -40% for the full month of September under the previous “Coordinated Measures Scenario”.

Taking all of this into account, the “Current Status Scenario” assumes the likelihood that:

– States remain uncoordinated in their response to cross-border air travel;

– Airlines will further reduce capacity in response to the collapse in forward bookings;

Total financial loss: Taking all of the above into account, there will potentially be a total industry loss in Europe in revenues of approximately €140 billion during 2020 for airlines, airports and ANSPs, up from €110 billion loss as indicated on 24 April.