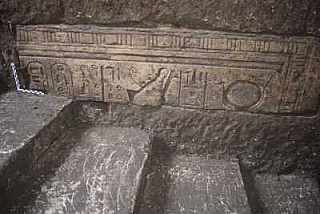 Egyptian archaeologists have discovered a set of artifacts at the Temple of Pharaohs, an ancient structure about 60 miles east of Alexandria.

The artifacts may have once been used in religious rituals, and could potentially shed light on some of the ceremonies that took place at the temple around 2,700 years ago.

The find was announced by the Egyptian Ministry of Tourism and Antiquities. Mustafa Waziri, secretary-general of the Supreme Council of Antiquities, said in a statement that the find was “an important discovery.”

Among the objects found were pieces of ivory carved to resemble women carrying objects; statues of Taweret, the goddess of motherhood known as the “Great One”; incense burners crafted from faience, a kind of glazed ceramic; a piece of gold sculpted to resemble the eye of Wadjet, the goddess of Lower Egypt; and a maternity chair. Archaeologists believe these artifacts may have once been used in ceremonies honoring Hathor, the goddess of fertility.

Experts believe these objects may have been “quickly placed” beneath a stack of heavy stone blocks, possibly to hide the objects as the Persian Empire began its conquest of Egypt, which ultimately led to the collapse of the 26th Dynasty, the last native Egyptian dynasty to rule.

In addition to this trove of artifacts, the archaeologists discovered what the described as a “large limestone threshold” that included a well once containing holy water. That structure also includes a bathtub, a bathroom, and a place where water could be heated.