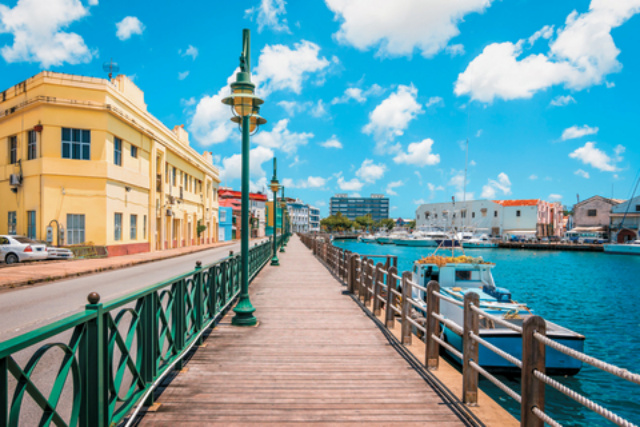 Bridgetown is the capital city of Barbados, which is known for its warm weather and sandy beaches. The name Bridgetown originates from its previous title which was ‘the Indian Bridge Towne’. In later years it was called ‘the Bridge’, ‘the Bridge Town’ and ‘St. Michael Town’.

This magnificent and historically rich city is located on the South-West coast of Barbados in the Parish of St Michael.

Prior to the arrival of the first European settlers, the Amerindians constructed a bridge over the Careenage river which inspired the city’s first name ‘the Indian Bridge Towne’. Today it is known as Historic Bridgetown and its Garrison, and it is Barbados’ first World Heritage Property.

The story of the magnificent city of Bridgetown begins on July 5th, 1628 when Charles Wolvesrton , soon to be Governor, and the second group of settlers selected Bridgetown because of its harbour.

Its harbors made it superior to Holetown, which is the first town settled in Barbados. The harbours at the Careenage and Carlisle Bay both located in Bridgetown made this city the perfect location for the early settlers.

Bridgetown was the perfect location for several reasons; it was a strategic military advantage, it protected the British trade interests from the Spanish, French, and Dutch and it also helps the British defend their imperial power in the Caribbean region.

The city has been the host of many world leaders during the 19th century. Leaders like; Winston Churchill, Queen Elizabeth II, and George Washington have all visited Bridgetown.

This city is the only town George Washington has ever visited outside continental North America.

Historic Bridgetown and its Garrison were recognized as having cultural and historical significance, because of this it is legally protected by international treaties.

Historic Bridgetown and its Garrison is “an outstanding example of British colonial architecture consisting of a well-preserved old town built in the 17th, 18th and 19th centuries, which testifies to the spread of Great Britain’s Atlantic colonial empire”.

After 1650, a military government developed gradually in what is now known as Historic Bridgetown and its Garrison, creating one of the strongest,most secure and functional British-owned garrison in the New World.

The Barbados Garrison was the largest in the British Colonies during the 18th and 19th centuries. The military garrison contains several historic buildings.

The Garrison is an example of British colonial architecture comprising of a well-preserved old town built in the 17th, 18th and 19th centuries, which is a testimony of Great Britain’s Atlantic colonial empire influence.

Bridgetown in the 21st century is a lively and exciting city with an atmosphere that embodies the industry and heartbeat of the people. This city is full of historic buildings and sites with a splash of modern offices, shopping malls, and other attractions.

The capital is also known as the main commercial centre, while in the capital you can find bars, restaurants, banks, shops, and duty -free shopping.

The capital is also the home of the island’s main public transport system, which enables locals and tourist to travel to any part of the island.

Walking around Bridgetown today you can see the history of the city. Today in modern-day Bridgetown remembrance of the early settlers are still present.

You can see the impact and influence of the early English settlers through the settlement patterns and early 17th-century street layout. One the city’s busiest street is named after the earliest surveyor – Swan.

For those who wish to explore the capital city, you can travel through Bridgetown when the weather is nice and sunny and enjoy a local meal at any of the various restaurants in the area.

You can either purchase items with the currency of Barbados or U.S. currency which are the only two currencies accepted on the island by vendors.

Before planning your exploration and sightseeing make sure to check the Barbados weather forecast, according to the national hurricane center, June to November is the Atlantic hurricane season.

While exploring the capital you will encounter locals speaking what is known as Bajan dialect, which is a form of broken English.

There are several hotels located in Bridgetown like the world-renowned Hilton. One of the new and exciting additions to Bridgetown is the HYATT Hotel which is scheduled to open in 2019.

Hyatt Centric Carlisle Bay will likely be near Bridgetown. This will allow guests to effortlessly travel, sightsee and discover all that Barbados has to offer. The 237-room resort will be placed on an estimated three acres of waterfront along Carlisle Bay’, which is known for its pristine white sandy beaches and reefs.

Carlisle Bay offers an abundance of shipwreck diving and snorkeling opportunities for guests and locals.

It is the home of Barbados’ only seaport, the BRIDGETOWN PORT and allows entry for both cruise and cargo ships. The main street is known as Broad Street, this street runs straight through the centre of the city.

You can find the city’s main shopping attraction and Parliament Buildings on this street. The city of Bridgetown is the home of the third oldest parliament building in the British Commonwealth.

This building is located north of National Heroes Square (previously known as Trafalgar Square). Bridgetown was once the most important city in the British Empire in the New World, because of its location in the Caribbean region.