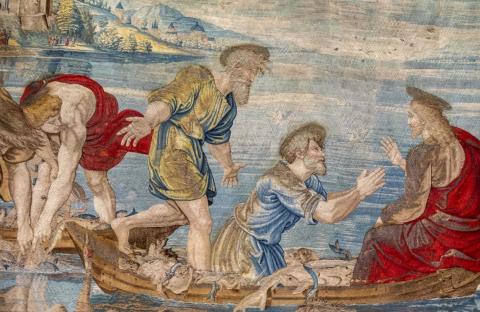 The monumental tapestries made from designs by Raphael are exceptionally on view in the place they were originally intended for, the Sistine Chapel in Rome’s Vatican Museums.

As part of the celebrations marking the 500th anniversary of the artist’s death, and for a week only, February 17-23, the tapestries, made between 1515 and 1519, have been hung on the lower walls of the Sistine Chapel.

Originally commissioned by Pope Leo X, they were to be hung in the Sistine Chapel on special occasions. They depict events from the lives of St. Peter and St. Paul, popular subjects in the Renaissance era. They were first displayed on St Stephen’s Day, 26th December 1519.

Raphael and his workshop worked on the cartoons in Rome, but the tapestries were woven in Bruges, a city in Belgium known as a center of excellence for tapestry production throughout Europe.

Raphael worked in the Vatican at the same time as Michelangelo. When Raphael began working on the tapestries, Michelangelo had only recently finished the ceiling of the Sistine Chapel. The two were quite the rivals and Raphael was well aware that the finished tapestries would be placed in the same room with Michelangelo’s masterpiece, so he was very accurate when preparing the cartoons and produced a depth of color that was not possible to reproduce in a tapestry.

Normally, a selection of the tapestries, which have been restored in the last ten years, are shown on rotation behind glass in climate-controlled spaces in the Pinacoteca Vaticana of the Vatican Museums.

Because they are so delicate, they will only be on display for a week. Some of them will be temporarily loaned to other museums, such as the Scuderie at the Quirinale Palace in Rome, as 2020 marks 500 years since the great Renaissance painter and architect from Urbino died.