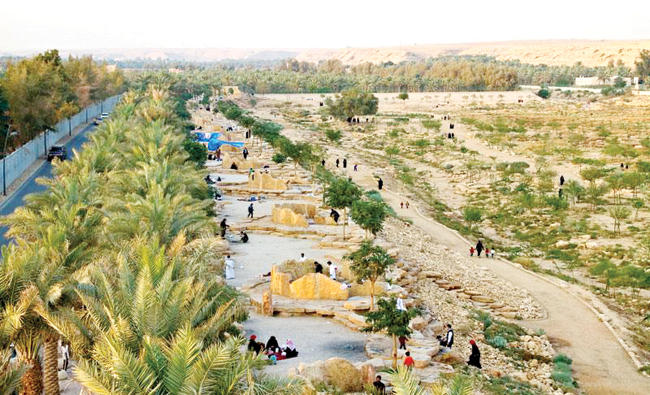 Riyadh in Arabic means a place of gardens and trees. While the city has become a modern testament of Saudi Arabia’s cultural and economic influence, it remains, as it was in its origins, an oasis filled with hidden natural beauty.

The Arabian Desert surrounding the sprawling city of Riyadh is vast and beautiful. Both desert and city alike are ripe with opportunities to enjoy nature. While it does take some planning to find transport to and entrance into some of the hidden natural sites of Riyadh and its surroundings, the adventure and splendour to be found (not to mention Riyadh’s glimmering, modern accommodations) are well worth the effort.

Here are some of the best hidden gems in and around Riyadh to find respite from the city streets.

Riyadh’s most stunning landscapes are in Wadi Hanifa valley, which runs through the city. Here an array of succulents, dramatic cliffs and vast rocky terrain create a natural haven in the midst of Saudi Arabia’s ever-developing capital. The puzzle-piece amalgamations of Mesozoic-era sedimentary rock provide a majestic backdrop for a hike or bike ride.

The wadi is well-maintained and extremely accessible thanks to a multimillion dollar facelift aimed at maintaining and preserving this important ecological feature. Families pass the late afternoon hours under the shade of rich date palms while their children play football. There are facilities and eateries along the wadi, or you can bring a picnic.

You might want to attempt to visit the sections of the wadi that run adjacent to the Diplomatic Quarters, then end your evening watching the sun go down over the layers of red rock. If you’re visiting during the rainy season in October, check local news reports to see if the wadi has flooded before planning an outing.

The Diplomatic Quarter of Riyadh lays adjacent to the wadi, which helps sustain the over 30 gardens maintained there. Each one is unique in character and content. Many garden paths have vines that wind up and around the classical Arabesque walls, all elaborately detailed with geometric designs.

Sprinkled through the gardens are fountains, some that dance, and others that serve as waterbeds for lotus. These provide sanctuary for taking a long reflective stroll, relaxing with a book or enjoying a romantic moment with your significant other.

Playgrounds dot the gardens, some with spider-webbed climbing structures and others made of giant wooden blocks. There are also dusty football fields and well-kept tennis courts should you want to enjoy a game with friends. If you’re looking for a pristine backdrop for family photos, this archipelago of oases is a must visit.

In March the tourism agency sponsors Spring Festival, a flower and plant exposition put on for the enjoyment of Saudis and tourists alike. Over 600,000 blooms create a lush carpet covering the grounds of King Abdullah Malaz Park, an inspiring logistical feat in this desert climate.

Wasum, or tribal markings, are the legacy of Neolithic peoples who first inhabited the once-verdant Saudi peninsula. The most popular of these rock art landmarks, Graffiti Rock, is not far from Riyadh. It’s sprinkled with camels, battle scenes and even hieroglyphs.

To get to the rock, you’ll need to find a guide and a relatively savvy driver who is familiar with major roads into and out of the city. A trustworthy list of guides can be found on the national Saudi tourism website; most are semi-fluent in English. You should always settle on a price for the drive out there before you depart. A trip might also include a local meal en route. Some guides will let you make rubbings of the images, but either way, be sure to bring your camera.

Diriyah, located on the northwestern outskirts of the Riyadh, was once the home of the Saudi Royal family. Scene of a year-long siege in the 19th-century clash between the Ottoman and Saudi armies, the city is now a lively tourist destination. The ancient mud architecture, reminiscent of a Gaudí structure, includes an upgraded bathhouse and a number of parks. Don’t miss the Saad bin Saud Palace, which is famous for its courtyard.

The red sand dunes outside of Riyadh provide the perfect opportunity for a family-friendly adventure. At Thumamah, both men and women can rent ATVs to traverse the dunes. There are pint-sized buggies available for rent that are safe for children to try as well.

Women are allowed to ride sans the abayas, or black cover-up robes, that are required at other outdoor venues. For those who are not up for the adrenaline rush of an ATV ride, the rusty tint of sand juxtaposed with azure skies fosters a meditative and relaxing stroll.